Just popped down to Ealing Film Studios  – a 5 minute walk from my house.

Went to drop off some flyers for this week’s Jane Shore gigs.

Ended up having a long chat with the receptionist there who also hosts the tours and she was extremely knowledgeable and helpful.

She showed me exactly where Will Barker built the first studios over 100 years ago. Originally a glass studio.  She proceeded to tell me the whole history of the studios  – which are the oldest (still running) studios in the world.

When you mention Ealing Studios to anyone, they always think of the Ealing Comedies, but these early silent films made 100 years ago are amazing and I’m really pleased to be able to bring them to audiences 100 years later..

More info about Will Barker and Ealing Studios here: 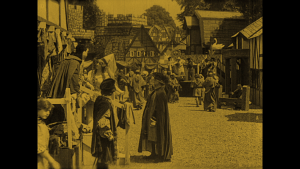 Great seeing all the sets there for films and TV being made there today. And amazing to be standing in the exact spot where Jane Shore was filmed 100 years ago..