Here’s a review of the film and music by Paul Joyce.  Check out his site here Ithankyouarthur.blogspot.co.uk  – loads of great stuff about silent and classic cinema.

Next live music screening is May 14th at The Cinema Museum, London 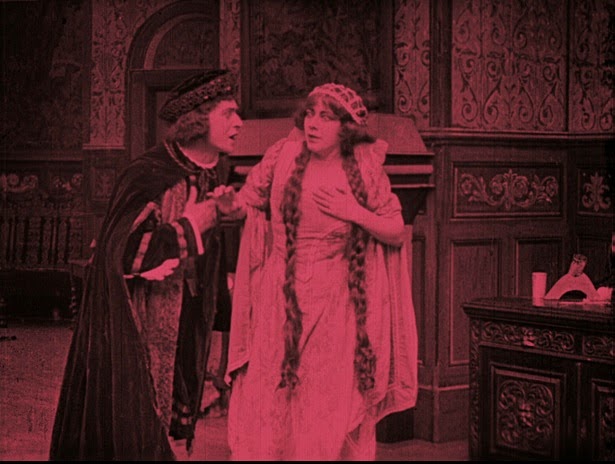 Recently the BBC – the BBC – carried a news story noting the centenary of “the first feature film” The Birth of a Nation which is like saying that Sgt Pepper’s Lonely Hearts Club Band was the first LP… a letter was almost written to the DG.

This multi-reeler is described as Britain’s “answer” to Birth (both were released in March 1915) and so naturally we were expecting large-scale invention, historical flim-flam and a healthy dollop of deluded white men on horseback wearing sheets. But what we saw was closer to the Italian classical dramas of the time, which is unsurprising considering the film’s origins in Nicholas Rowe’s 1714 play The Tragedy of Jane Shore.

Jane Shore was the mistress of King Edward IV, who reigned on and off from 1461 until his mysterious death in 1483 – “not my period” as we historians always say but I’ll give it a go.

Jane Shore – originally Elizabeth Lambert (the Jane was added by another Seventeenth Century playwright after her given name was temporarily mislaid) – lived a long and eventful life. Many years after Edward’s passing and the defeat of his recently re-buried brother, Richard III by Henry VII, Thomas More, declared that even in her old age an attentive observer might discern traces of her former beauty.

But Jane Shore is by no means a Mantell-esque forensic historical docu-drama: it’s a romp and pure entertainment from start to finish!

It opens in grand style as many hundreds of defeated Lancastrian soldiers retreat through massive steep valleys having been routed by the army of the White Rose led by Edward. It’s a stunning shot and crystal clear in the BFI’s new restoration marking the film’s centenary. The sequence is so fine that it’s repeated later as the Yorkists taste defeat and there is a wonderful shot showing the men almost rolling down the steep hill with cinematographer Will Barker’s camera angled almost above them – take that Mr Griffith!

Directed by Bert Haldane and F. Martin Thornton, Jane Shore was filmed in part at Ealing Studios and produced by Will Barker, who founded the original studio in God’s own commuter-county, Hertfordshire.

The story is a truncated version of “Jane’s” life focusing on the Edward years and beefing up her relationship with Shore who it is suggested she sacrificed herself to Edward’s lust in order to protect: Laura Rossi explained that in reality she divorced him on the grounds of impotency.
Shore’s brother William (Nelson Phillips) is a Lancastrian hero and his brother comes to his rescue after he is imprisoned in the Tower.  As elsewhere in the film, Haldane and Thornton frame their static shots dynamically, creating tight-angled tension from the walls and battlements. There’s a close-up blur of battle as the rebels overcome the drunken Yorkist guards and climb down the walls to freedom.

The action shifts to the domestic as the overwrought Margaret tries to turn Matthew’s head but he’s set himself on young Jane and ignores her flailing arms and over-eager elbows. But two masked playboys from the royal court come to town and one of them takes a shine to Jane before revealing himself to be Edward! Malicious Madge squeals in delight as Matthew makes one of many grabs for his blade…

Jane calms his anger by agreeing to marry him but in steps Marge again to inform on him as a Lancastrian spy. Matthew fights of dozens of royal guards and escapes to his brother’s troop leaving Jane to accept her fate as a mistress of the court.

Enter Richard hobbling with intent, stage right… After trying it on with Jane himself and being shooed away by Lord Hastings (Thomas H. MacDonald) he tells the Queen (Maud Yates) of the King’s affair (in reality Edward was rather active in this respect although he retained respect for Jane right up to his untimely death).

From now on it’s Dick’s tricks that drive the narrative and with such a villain smiling at the heart of great misfortune, you have to hope for some kind of happy ending…

Laura Rossi’s score was expertly judged and one of the best ensemble accompaniments I’ve seen for some time. She played piano alongside an electronic backdrop and was accompanied by a top-notch trio: Sophie Langdon (Royal Philharmonic, BBC Symphony etc) on electric violin, Bozidar Vukotic (Tippett Quartet, English Chamber Orchestra and more) and Mike Outram on guitars who in addition to being a professor at The Royal Academy has also played with Steven Wilson and the great Robert Fripp.

Together they produced an engaging sonic narrative of some depth and invention. It was a Friday evening after a long working week and this was instantaneously engaging, welcoming music which greatly enhanced the cinematic experience. A true soundtrack that was melded to the century-old “text” and which helped the audience connect…

In her introduction Laura explained how her composition tracked Blanche Forsythe emotional shifts and the music was such a disciplined servant to the action throughout. In one scene after a confrontation between the King and Matthew the monarch stomps through a crowded room followed by the angry insurgent: the music builds with the rhythm of the extras’ movement as they hoard towards the centre of the screen crushing round Matthew to prevent his taking the matter further. Such diligence rewards with a seamlessly-sympathetic score.

There’s more about Laura’s extraordinary music on her site and don’t miss this show if you can: a precious example of early British cinematic sophistication. Not quite up there with Griffith or the most advanced Europeans but brilliantly British all the same!

The Jane Shore tour continues into May – details are on Laura’s site here.